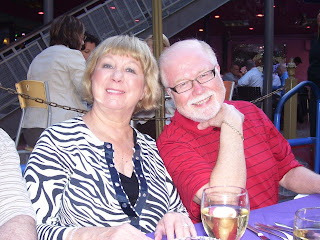 Phil will be retiring from Sons of Norway this summer. Phil was recognized at the FHOUA luncheon for all his years of service and his contributions to FHOUA. In this picture from San Antonio, Phil is enjoying a riverboat dinner with his wife.
Posted by FHOUA at 7:18 PM No comments:

The generous hosting of various functions by some of our industry service providers has been a feature of the FHOUA since the early days. These companies have supported us not only financially, but with their expertise on timely issues and updates on products and services. We value and appreciate the commitment of all our sponsors throughout the years.
2010 Sponsors Honor Roll
Heritage Labs
Hooper Holmes / Portamedic
Optimum Re
ExamOne
MRS
GenRe
OraSURE
Clinical Reference Lab
APPS
EMSI
MIB

Thank you for your support!
Posted by FHOUA at 7:11 PM No comments:

Sharon Marble started it all in 1985. At that time Sharon was Director of Underwriting at Royal Neighbors of America. She was aware that the Farm Bureau organization had a practice of holding a meeting of their underwriters immediately following the IHOU. Sharon reasoned that the fraternal underwriters in attendance at an IHOU meeting would also benefit from getting together.

It seemed clear that such a gathering would advance the cause of fraternal underwriting. So, Sharon picked up the telephone and placed calls to several fraternal societies, asking if they would be interested in joining such a group. Having received considerable encouragement, she then wrote to all the fraternals, informing them a meeting would be held following the 1985 IHOU convention in Dallas, Texas, A total of twenty fraternal societies were represented at the first meeting.

In 1987, a small group consisting of Del Hoeffner, Jim Lee, Sharon Marble, Larry Martin, and a few others concluded that the group should become official, elect officers, and draw up by-laws. A list of five articles was developed, covering purpose, officers, membership, meeting and amendments.

The usual format of meetings of the Fraternal Home Office Underwriters is an informal question and answer period. Although we discuss important issues and facts of life underwriting, we avoid all activities, which could or might appear to violate antitrust laws. We avoid discussing pricing, ratings, or proposing any business actions regarding individual applicants for insurance. The purpose of our association, as stated in the by-laws, “is to stimulate the thinking and increase the knowledge of members, and not to formulate or recommend any underwriting procedures or practice.”

Notes of the discussion have been circulated each year, and in 1991, the first directory was printed and distributed.

The life insurance industry in general and fraternal societies in particular have taken many a turn since the FHOUA was founded. And no one doubts that changes will come at an even faster pace in the years to come. The existence of an organization like the Fraternal Home Office Underwriters Association is sure to become even more valuable, as fraternals – with their unique strengths and challenges – face the future.
Posted by FHOUA at 7:05 PM No comments: 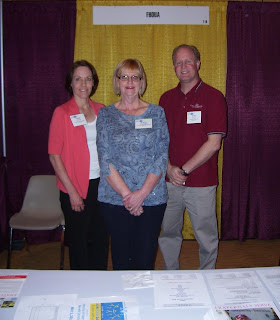 FHOUA had a booth at the 2010 AHOU Expo in San Antonio. This was the first time that FHOUA was represented on "Education Row" at the Expo.
We plan on doing it again in 2011 when AHOU heads to Las Vegas.
Pictured left to right - Janet Palmer/FHOUA Vice President, Karen Paladino/FHOUA President, Kurt Vlach/FHOUA Secretary.
Posted by FHOUA at 7:07 PM No comments: